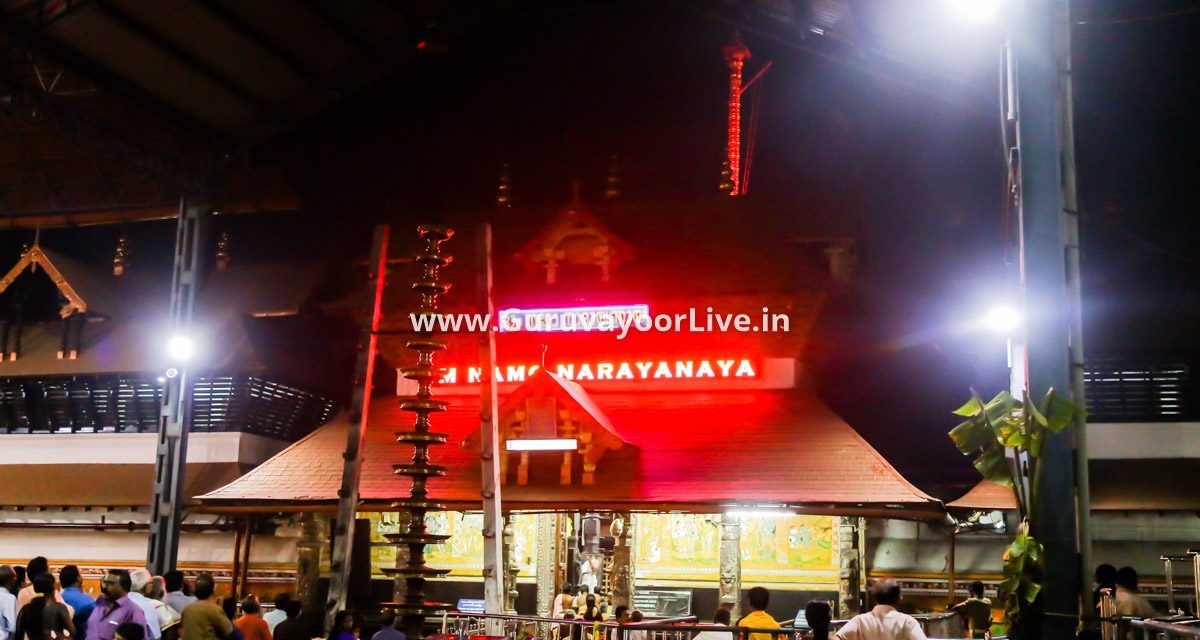 Guruvayur Temple Festival - Here you will get information about festivals held in Guruvayoor Temple. Like,

Mandala pooja begins on the first day of the Malayalam month of Vrishchikam. This is a period of 41 days for the pilgrimage to the shrine of Lord Ayyappa at Sabarimala. Most of the devotees who go to Sabarimala also visit Guruvayur. At Guruvayur, there will be special abhishekam with panchagavya (mixture of five products of cow – milk, curd, ghee, urine and cow dung) on all days. Many devotees visit the shrine to partake of it, since it is believed to burn up all inner impurities. Chakkiyar Koothu takes place after lunch. Krishnanattam may be performed after Athazha pooja . Mandalam comes to end with Kalabhaattam (pouring mixture of sandal paste, saffron, camphor and rose water) on the deity. This special offering is made only once in a year and it is the hereditary privilege of the Zamorin Rajas. Besides, the three seevelis during mandalam will be conducted with three elephants and they take five rounds around the temple. The famous Guruvayur Ekadasi festival, Melpathur statue installation day, Narayaneeyam day and Kuchela day also occur during Mandalam, thus making it the busiest season at Guruvayur. During this season, special arrangements are made for ‘kettunira’ and ‘malayidal’ in front of the Sastha shrine inside the temple.

Of the 9 days of the Navarathri festival, the last three days are specially sacred for goddess Saraswathy who presides over the world of learning and fine arts. Children are initiated into learning on the last day known as Vidyarambham day. The training in Krishnanattam, Kathakali, Kalaripayattu, (traditional martial art-form of Kerala) etc. generally begins on this day.

On the Uthradam day of the month of Chingam (August- September), thousands of devotees bring “Kazhcha kulas” (bunches of Banana) as offering to the Lord. These bananas are given to all the elephants of Guruvayur Devaswom on the same day or next day. On Thiruvonam day, free Onam feast with Pazhaprathaman is given to thousands of devotees.

Ashtami Rohini in Chingam (August-September) is the birthday of Lord Krishna. Appam and Palpayasam are considered to be important offerings on this day. Special feast is arranged for the devotees.

It means new rice. It is a formal beginning of the use of rice from the new harvest season for offering in the temple. Puthari payasam is offered to Lord; it takes place in the month of Chingam.

The Vaishakha is the lunar month starting from new moon of Medam (April-May). The Vaishakha vratham (fast) is auspicious and sacred to Vishnu. The vratham can be followed in the routine of morning ablutions , feeding the poor, keeping fast, taking prasadams from the offerings to the Lord and participating in the divine discourses. The third day of this month – Akshaya-thrithiya – birth day of Balarama, is the most auspicious. Palpayasam is the main offering and feast is also arranged during the entire Vaishakha month.

The first day of Medam ( mid April) is the new year day for Malayalees. People believe that the fortunes for the next year depend on the nature of the objects one sees in the morning of Vishu. For this purpose, Kani (an omen) with articles like yellow flowers, rice, betel nuts, golden coins etc. is displayed in front of the deity. Thousands prefer to see Kani at Guruvayur on Vishu morning. Crowds stay overnight inside the courtyard of temple, which is specially permitted on this day. They close their eyes and set their eyes on the Kani and deity, as the doors are opened at 2.30 am for darshan.

The first Wednesday of the month of Dhanu (December) is celebrated as Kuchela Dinam. It is based on the belief that it was on this day that Kuchela, an ardent devotee of Lord Krishna offered Avil (parched rice) to him and in return attained eternal bliss and material property . Avil offering is considered auspicious on this day.

The Samkrama Sandhyas, a very auspicious occasion for worship of the Lord, is observed by the devotees on the eve of each Malayalam month in the spirit of intense devotion and piety. Thousands of people stream in to the temple for a darshan of the Lord at the time of Deeparadhana. Spiritual discourses and various cultural programmes befitting Hindu faith are held at Melpathur Auditorium.