Poonthanam Namboodiri was a humble devotee of Lord Guruvayurappan. He wrote a Malayalam lyric “Jnanappana” in praise of the Lord. He was not erudite like Bhattathiri but his lyrics were noted for their simplicity and devotional fervour. He requested Bhattathiri to revise it, but Bhattatiri lacked humility and looked down upon Poonthanam’s knowledge of Sanskrit. Poonthanam went home and wept bitterly before the Lord. That night a boy appeared at Bhattathiri’s house as he was preparing to recite Narayaneeyam. Seating the boy at his side, he started to recite. The boy pointed out an error in the very first verse. The poet admitted it and proceeded with the next verse, and the boy pointed out two mistakes. In the third verse, he pointed out three mistakes and so on. After the tenth verse, Bhattatiri realised that the boy was the Lord himself, and understood that Poonthanam’s bhakti was more pleasing to the Lord than his own superior knowledge of Vibhakti (Sanskrit grammar) and learning. He rushed to Poonthanam and sought his forgiveness. When he read the Jnanappana, he found that it was flawless.

King Manaveda told Vilwamangalam about his ambition to view Krishna. The next day the Swamiyar told him that Guruvayurappan has given his consent and Manavedan can see Guruvayurappan playing in the early hours of the morning at the platform of the Elanji tree.He could only see and not touch Him.When as per this agreement, Manavedan saw Guruvayurappan in the form of little child Sri Krishna, he was so excited that he forgot himself and, rushed to embrace little Sree Krishna.Guruvayoorappan immediately disappeared saying, “Vilwamangalam did not tell me that this will happen “.However, Manavedan got one peacock feather from the head gear of Bhagavan Krishna.

The peacock feather was incorporated in the headgear for the character of Sri Krishna in the dance drama Krishnanattam based on his own text krishnageeti which is composed of 8 chapters viz, Avatharam, Kaliyamardanam, Rasakrida, Kamsavadham, Swayamvaram, Banayuddham, Vividavadham and Swargarohanam. It was performed near the sanctum sanctorum of the Guruvayur Temple. On the ninth day, Avatharam was repeated as the Samoothiri felt that it was not auspicious to end the series with the demise of Lord Krishna.The blessed art form is still maintained by guruvayur devaswom and staged as an offering by devotees.

Sengalipuram Anantharama Dikshitar : In modern times, this well known scholar and Upanyasa Chakravati was cured of his leprosy by praying to Lord Guruvayurappan. His disease was advanced that the watchman did not allow him to take bath in temple tank. 3 or 4 years later, Dikshitar came to pray to Guruvayoorappan to the amazement of all. The miracle was due to his faithful recitation of Narayaneeyam.

Vilwamangalam Swamiyar and Kurur Amma were cousins. There is a holy spot, Nritham, on the eastern side of the northern entrance to the temple, where the Swamiyar meditated and danced in ectasy. Its believed that the Lord often gave him darshan in person after the last ritual of the day. He could see him whenever and in whatever form he wished. The Lord was a child to the childless Kururamma. She played with him and would even scold him when he was naughty. He helped her in all her household chores as a dutiful son would, for his mother.

The Garland of Manjula : There is a banyan tree a few metres away from the temple on the East Nada. A young Varasyar girl would make a garland every day and offer it to the Lord in the night. The Mel Shanti (Chief Priest) would adorn the idol with it. One day she was late and the Sri Koil was closed. Manjula stood near the banyan tree crying and Poonthanam who passed by told her “Guruvayoorappan knows what’s in your heart, keep the garland on the banyan tree and he will take it”. The following morning, when the Mel Shanti began to remove the nirmalyam, one garland stuck to the idol and would not come off. When Poonthanam saw this, he called out to the Lord saying “That’s Manjula’s Garland, let it also fall”. The garland fell and the devotees were awestruck and started chanting the Lord’s name. From that day the banyan tree is called Manjula.

Chembai Vaidyanatha Bhagavatar : He lost his voice suddenly at the peak of a concert he was giving at Suchindram. Several doctors tried to cure him but to no avail. He went to Guruvayur and cried out to the Lord. He regained his voice and lived many more years to sing in many concerts.

Coconut with horns : A villager had planted a number of coconut saplings and had promised himself that he would offer the ‘first coconut’ from each of his coconut trees to “The Lord Guruvayoorappan”. When the trees started to yield coconuts, he collected the first coconut from all the trees in a sack and set forth to Guruvayoor. On the way he was stopped by a robber and asked to part with the items in the sack. The villager told the robber that the coconuts in the sack belonged to Guruvayoorappan and so he was unable to hand it over. The robber disdainfully asked the villager “Is Guruvayoorappan’s coconut any different? Does it have horns?”. When the robber pulled the sack forcefully out of the villagers hands, the coconuts spilled out. To their astonishment each and every coconut in the sack had horns! Even today, the coconut with horns are displayed in the temple for devotees to see.

Shopkeeper and boy : Once, a poor little boy could not get even a morsel of food to appease his hunger, and stole a banana from a nearby fruit shop. Being a devotee of Lord Guruvayurappan, he dropped half the banana into the ‘hundi’ and he ate the other half. The shop-keeper caught hold of the boy and accused him of the theft. The boy admitted his guilt. The shop-keeper did not have the heart to punish this innocent boy, but to teach him a lesson, he ordered him to walk around the temple a certain number of times. The shop-keeper was aghast when he saw Lord Guruvayurappan follow the little boy around the temple. That night the Lord came to the shopkeeper in a dream and explained, “Since I have also had a share in the stolen banana I am bound to share the punishment, too. So, I followed the boy around the temple.”

Nenmini Unni : Once a Nenmini Namboodiri, the priest at the Guruvayur temple, instructed his twelve year old son to offer the Nivedyam to the Lord. There was only one priest in those days and the Nenmini Namboodiri had to go out on an urgent engagement. The son, Unni, offered a Nivedyam of cooked rice to the Lord; in his simplicity, he believed that the idol would eat the food, but the idol did not move. Unni bought some salted mangoes and curd from a neighborhood vendor, thinking that the Lord would prefer this, mixed the curd with rice and offered it again. The idol again remained unmoved. Unni cajoled, requested, coaxed and in the end threatened, but the idol remained unmoved. He wept because he believed he had failed and shouted at the Lord, exclaiming that his father would beat him. The Lord could not bear it any more, and made the Nivedyam disappear. The boy left the temple satisfied. Unni did not know that the Nivedyam offered to the Lord was the Variyar’s prerequisite. When Variyar returned to the temple, he saw the empty plate and became very angry with Unni, but Unni insisted that God had, in fact, eaten the offering. Unni’s innocent words made Variyar furious, as he believed the boy had eaten the offering himself and was lying. His father was about to beat Unni, but just then an Asareeri (celestial voice) was heard saying, “I am guilty. Unni is innocent”. 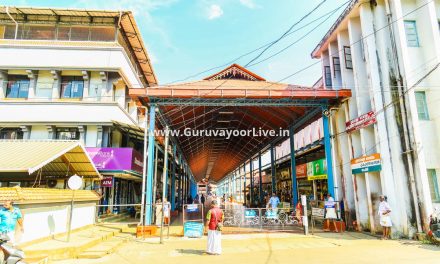 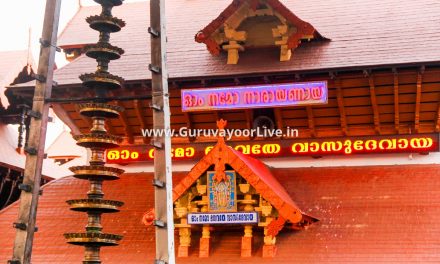